Some nights there is no sleep to be found in my restless city; sometimes it is the heat and humidity, occasionally it is the flashing neon lights. But usually it is the noise. Most of the sounds are familiar to me now, but that doesn’t mean they don’t have the power to keep me from falling asleep. The sleeplessness gives my mind time to wander and compose childhood inspired verses. 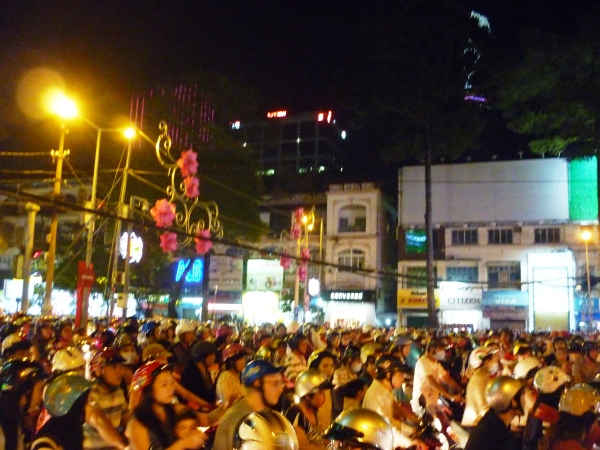 Goodnight monks praying for the dead.

Goodnight mosquito in my ear,

Goodnight workers at the building site,

why do you work so late at night?

Goodnight karaoke in the air,

It gets pretty noisy in Sai Gon; it is probably one of the first things you notice about the place. This isn’t unexpected considering there are about 8 million people living here. Everyone seems to be pretty good about tolerating other people’s noise, probably because they themselves are making as big a racket. It is just accepted that some joyful noise is necessary for marking births, weddings, and other wonderful occasions. Opening a new shop usually warrants a celebration, as does observing various national holidays. And noise is also needed to observe times of sadness– funerals, war anniversaries and remembrance days. These are just the basic reverberations of life in a city.

It is also quite acceptable for animals to chime in too; anyone who tells you that Roosters only crow at dawn is telling you a bare-faced lie. They screech whenever it gets too quiet for their liking, as do cats and dogs. After a while, you learn these different noises and they become part of the background murmur and growl of the city.

But there a growing backlash against the really unnecessary noise. Many stores are equipped with big internal and external speakers playing assorted, deafening music of dubious charm to attract customers. Cars and public buses use loud air horns, repeater horns and the audible turn indicators. Some motorcyclists seem to ride with their thumb constantly pressing on the horn.

Demolition and construction sites tend to operate at all hours of the day and night (particularly at night). Trucks and jackhammering will go on into the early hours of the morning, stop for a few hours and start again at dawn – for weeks on end.

I work in the very centre of Sai Gon and there is an entertainment space across the road from my office. There are events held there during the week; usually they are promotional events or the launch of a new product and sometimes it is a sporting match. They also hold music concerts from Friday to Sunday. They start the sound system tests just after lunch on Fridays and we settle in for three hours of the Vietnamese equivalent of “Test, Test, one two…”

Fines for noise pollution are very low and rarely enforced – I don’t think they do much to deter people.

Then there is the music. I recently attended a wedding and the entertainment was a singer whose sound system was ‘up to eleven.’*The music was so loud it was painful; I had to scream at the person next to me to pass the water. This wasn’t the first time I’d been stunned by the volume that music is played at, but this time I decided to get some answers.

I’ve asked a couple of people around the table why the music is so loud. They shrug.

I ask if they even like the music that loud. More shrugging and one person’s “Oh God, no. It is far too loud!”

Then I ask, why don’t we turn it down? Well we can’t lower the volume; my cousin’s wedding was last week and how would it look if we didn’t use at least the same volume?

I think perhaps the general noise pollution stems from people turning their music up so you could hear it over the motorbikes, the roosters, the construction sites, the shop openings, the market stalls and a sinister sound arms race began. Then a societal expectation formed that music should be played at decibels similar to a Led Zeppelin concert and here we are.

Everyone is vying to be heard and we are drowning in noise.

Viet Nam, let’s stop this madness and reset our concept of how loud is too loud. Let’s rediscover quiet times and relax for a moment; I think we could all use a bit of hush from time to time.

*A pretty solid ‘This Is Spinal Tap’ reference. If you don’t recognise it then you’ve never seen the movie or you have and you’ve forgotten it. In either case, I recommend watching it immediately.